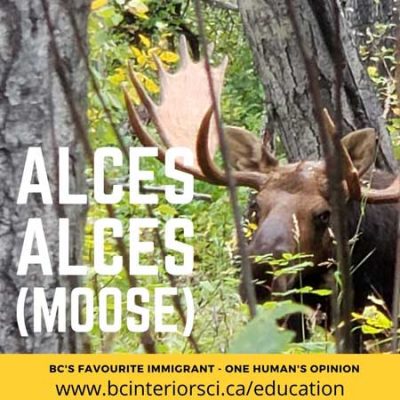 Alces Alces – ask any BC hunter about moose and moose management and a vigorous discussion will soon follow.

“I remember when……moose were everywhere.  Hardly dared to drive at night; them critters where all over the roads.  In September we used to head out to No-Tell-Um Creek, grunt a few times and one would show up, just like clockwork.  Today, don’t see’em; don’t even hear’em, not a track.”

As the conversations goes, some truths in all of it.

In the 1960’s BC’s moose population were estimated to be over 300,000 individuals.  Today, estimates are somewhere around half of that.  In the 60’s vast parts of BC were unroaded, unlogged and the landscape looked quite different; miles and miles of untouched and intact forest.  In the 60’s all terrain vehicles (ATV) were not yet invented; we still relied on feet or horsepower to get into the back country.  Still needed a compass and some bush savvy to get there and find your way back.

In 2021 things look quite different.

Most of BC is roaded and cut blocks dominate the landscape.  Thousands of quads, side-by-sides, motorcycles, and snowmobiles cruise the backcountry.  Online satellite photos are free for the download and GPS systems can get you there and back without you even knowing where you went or how you got back.

One can sit in a heated and air-conditioned travel trailer for days drinking coffee, watching a cut block, just in case that one moose does show up.  Hunters post signs asking people to stop shooting cow moose so their population can recover, while at the same time government asks hunters to shoot cow moose to get rid of them (so caribou can live, they say).

Grizzly bears are now protected, and one risks their reputation if they are brave enough to shoot a wolf and then be foolish enough to admit to it.

What happened; where did our moose go; who or what is to blame?

Fact or Fiction – BC’s indigenous people have harvested and relied on moose as a dietary staple for millennia?

A bit of both.

Oral histories tell us that moose have lived in BC’s far north for a “couple” centuries.  Then, for reasons still unknown, moose began to migrate southward.  An indigenous elder once told me that their stories say moose arrived in the Hazelton’s in the 1880’s.

Today, they populate most of the BC mainland and can be found as far south as the state of New Mexico.

Written histories tell us more of these same moose stories.

Excerpt from Game Trails in British Columbia – Published 1926 – Bryan Williams (13 years as the Head of the Provincial Game Department).

“Thirty years ago there were not many moose in British Columbia.  There may have been a few in the East Kootenay at that time, but in the north, where there are so many now, they were a rare animal, even if any at all existed.”

“On the west side of the Fraser River seven or eight head of moose were seen close to the Chilcotin River some time last winter, which is the farthest south so far recorded in that neighborhood.”

Could this same statement be applicable in 2021?  Some may think so.

“Before the bad winter of 1886 – ’87, elk roamed the country in large numbers.  Jim Stewart told of seeing carcasses down by the mouth of the Chilcotin when he first came to the country in 1888.  George Renner tells of ploughing the Shee place and turning up elk bones every ten – fifteen feet.  In 1914, the first moose were reported.  Hommer Renner and Ernie Damon shot one at Harpers Meadow.  Molesse shot one at Indian Meadow and divided it up among his friends – just in case it might be poisonous!  Jimmy Isnardy saw one at Stone ranch.  Only a few came until 1918, when the country was suddenly overrun with them.  They reached their peak in ’45.”

Fact – BC history tells us that for most of BC moose did not arrive until the early 20th century.

Talk moose and the conversation will soon turn to predators.

A quick internet search and one is buried with conflicting opinions, yet all are labelled as science.  An Alaskan study where cameras were attached to grizzly bears and tracked by GPS shows them killing dozens and dozens of moose and caribou calves every spring.  Studies that show it is not predators, but logging and industrial forestry who are responsible for the moose demise.  Studies show that it is wolves who are responsible.  Studies that show it is hunters, and on it goes.

But what does our history really say?

Our history says that left unchecked, wolves will thrive on moose, that a strong wolf pack can and will kill any moose, whether it is the smallest of calves or the largest of bulls.

“And as you know, talking about change, up until about 1930 there were no moose in this country.  When the first ones showed up people didn’t even know what they were – but soon found out…with plenty of willows and no predators they soon increased to outstrip their food supply…They (ticks) got so bad you couldn’t place a finger on the dead ones without touching a tick…At first there were just a few (wolves) but before long with all the moose meat for them to eat, we had thousands. Hardly a day would go by, but we’d see some.  Sometimes in big packs, sometimes only a few, big ones and small ones of all shades.”

“My dad saw the first track in ’21…Having seen pictures of moose he figured that’s what must’ve left the track – simply because it couldn’t be anything else.  No one believed him of course – until the following year when one was shot, and from then on they increased fast.  Following the great fire of earlier years, the second growth had flourished and so in turn, had the moose – until they became a pest to the ranchers.  They peaked around 1940 – and that is also when Victoria got into ‘wildlife management’ and I got into outfitting.

…Like wolves you mean?  Oh hell, yea.  Didn’t show up for quite a while though, but when they came, they came in droves, forty, fifty and sixty in a pack.  Sure as hell, they’da mopped up th’ last moose if them biologists hadn’t got into poison.  Bout th’ only thing them guys ever done right…”

History tells us that after the moose arrived, wolves soon followed, and with a seemingly unlimited of food did what wolves do and multiplied rapidly.

History also shows us that although poisoning was effective at controlling wolves it had have many unintended consequences when used indiscriminately.

“Oh yes, caribou and moose, especially caribou.  At one time the country was loaded with ‘em.  Caribou everywhere – and then something happened….They just laid down and died.  Now and again I’d shoot one for meat like I’d always done but it would look so rough I just couldn’t hack it.  Other trappers said the same thing.  And then the wolves came…same with the moose.  First there none.  No one had even seen one and the first one shot became the talk of the country.  Then they started drifting in, more and more, and breeding up too, until there was one behind every tree and then they too got things wrong with them; then came the ticks; then the wolves…..

History also shows that with the arrival of moose and wolves, caribou populations declined.

Coincidently or because of?

That discussion continues and is best left for another day.  History also tells us with the arrival of moose and decline of caribou, indigenous peoples soon switched from eating caribou to moose.  It also tells us that many other BC residents also added moose meat to their diets.

Next week – What do others do for their moose management?  Can we do better?