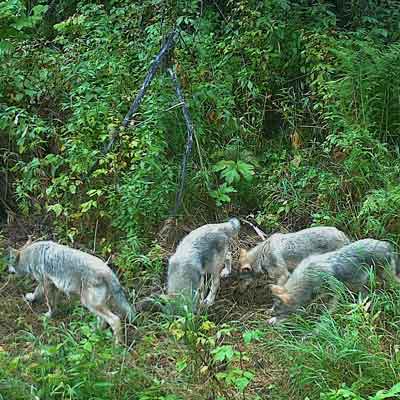 How easy and appropriate to use this famous quote for my story about the wolf!

Probably as apt as anyone could find, and if the recent media attention wolves garner in BC is any indicator, Dragnet likely had more reality and more facts than the emotional wolf stories of today.

March 23rd will be the one-year anniversary since “The Lone Wolf of Discovery Island” was shot by a human on Vancouver Island.

In the weeks leading up to March 23rd, 2021, we will see another barrage of stories about noble wolves battling ruthless hunters, written by BC’s plethora of Environmental Non-Government Organizations (ENGO’s) in their crusade against hunting and predator management.

Like Cheeky the grizzly bear in 2013 and Cecil the lion in 2016, this wolf was vaulted into the same stratosphere in 2020 by a carefully crafted media campaign from those who oppose any form of wolf control.

Headlines shouting “A special and much beloved wolf shot by a ruthless and hated hunter” certainly gained attention, but the story is so wrong.

Truth – this was a wolf, much beloved by the adjacent community.

Myth – this was a not a ruthless human, also much beloved by his family.

Wolves are a wild animal trying to survive in a dog-eat-dog world, and no more noble than the prey they eat.  They are only carrying on as they have for millennia.

Hunters are humans, no more ruthless than a doctor, schoolteacher, or barista.  We are all one and the same.  Hunters, carrying on their traditions and cultural practices like the 100’s of generations preceding us, also trying to survive in a dog-eat-dog world.

Fact – Wolves fit into our brain based on what we are conditioned to believe.

We all have moments in our life when something just sticks to the back of our skull and stays there.  One of mine came from a wolf.

I was deer hunting near Chetwynd, late fall, middle of a November snowstorm.  Fresh snow on the ground, deer tracks everywhere, great for tracking.  Fully camo’d, including face mask, clothes covered in snow, sneaking through thick bush and trying to follow deer tracks that went every direction. Heard something, stopped and seconds later a big black wolf was less than 6 feet from the end of my gun barrel.  So close I could see into its green eyes, almost feeling the intense stare.

For what seemed like an eternity, we stared at each other, locked onto each other’s eyes, both totally surprised that we had got this close to each other.  It took a few seconds for the wolf to figure out that a; I was not one of the deer it was chasing, and b; that I was something very much alive and staring back.

I watched as its lights slowly came on, that this was not a place it wished to be, and with that, watched as it very slowly and carefully walked backwards in the same steps it came in on, eyes locked on mine, until it disappeared.

Never did see that wolf again, never did get a deer that day either.  The following year did find the bleached skull and horns of one of the bucks I was hunting that day, a casualty during the previous winter.

When I tell this story, I am often asked why I just didn’t shoot.  Hard to explain, as I have shot wolves before and since.  At the time, it just seemed like it was one of those life moments when choosing to do nothing and let things play out, was the thing to do.

I could also tell you about a cow elk, bloody and bleeding, who stood for five days, backed up to a cliff, fending off two wolves, nothing to eat, nothing to drink, but that is just another wolf story.

These stories say a lot about the power of a wolf.

Those who hunt can view wolves as competition for the same prey.   Ranchers as a financial penalty as they maim, kill, and consume livestock.  Pet owners as an efficient predator that can kill and eat their pets.  Tourists as a magnificent creature, yet seldom seen.  Photographers as a rare opportunity for a spectacular photo. Trappers as an economic opportunity.  ENGO’s to capture public attention in their quest to end hunting.

List is longer but you get the point.  We are what we believe, and our beliefs come from our own points of view.

Although multi-media campaigns to “save the wolf” will portray hunters as uncaring people who wish to eliminate wolves from our forests, the reality is that this is their creation of another myth.

Fact – hunters and hunting organizations donate more money and time to help conserve and protect our wildlife and their habitats than any other groups of persons on earth.

Fact – ENGO’s dedicated to stopping the hunt spend most of their donations bettering themselves and the least amount on the conservation of wildlife and their habitats.

Yes, easy to find a quote in justifying claims that hunters want all wolves gone.  But no truer than hunters saying that those who are behind these campaigns wish to see all prey gone.

Some have already written romantic novels about this lone wolf, and others will likely follow.  Stories about how this wolf was lonely, just wanted a mate and how he went searching. Stories about what if he got that mate and how they could have lived an idyllic life raising pups and lived happily ever after on their small island.

Myth – wolves are romantic, thinking and acting like humans.

Fact – multiple wolves cannot live on a small island and sustain themselves, that when they run out of prey, they will go swimming.

In this case, the closest and easiest source of food were the pets and deer living across the water in the suburban areas of Victoria.

No where in these stories is the dilemma the Conservation Officers faced when they tranquilized this now famous wolf.  Take him back to the island and he would likely leave for the same reason he did the first time.   Leave it in Victoria and watch pets disappear.  Move him out into the “wilderness” with the full understanding that he will immediately be lost, likely be chased or killed by another wolf pack for trespassing on their territory and not knowing where to find his prey which he needs to eat almost daily, always to be hungry.

No where will these stories reiterate that when wild animals are subject to repeated human interactions that they lose their fear or understanding of humans, and that when this happens, results are predicable.

Almost missing from this story is the part about the now infamous photographer who hounded this wolf for years, to capture and sell the perfect picture, who taught this wolf to not fear humans and who wrote stories about this wolf as being like a human.  A few in the media did pick up on this “small” reality and did call it as it was; “The lone wolf who was loved to death”.

Facts – habituated predators have a habit of showing up where they should not, and when hungry, they lose the understanding that humans are a remarkably similar predator who will also defend their territory.

Missing in all these stories is what we, as hunters, are most concerned about.

Fact – the absence of prey on the landscape.

This lone wolf traveled over 50 km from its release point, and it would be a good guess that during these travels it did not find a place already claimed by other wolf pack and one where there were sufficient deer for it to kill and eat.  And, being just like any other hungry predator, it keeps wandering until it finds such a place.

This wolf was not alone in needing to wander.

Every week we read another story about a predator in an urban setting chasing people and/or their pets or livestock.  Reasons are all similar.