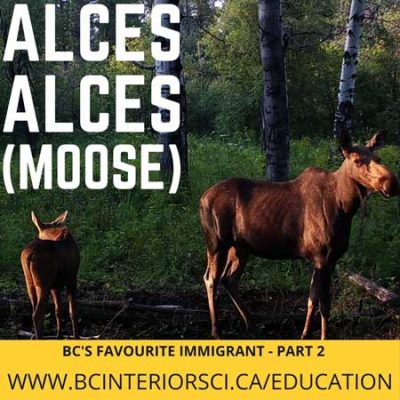 Last week we looked at the history of moose in BC and a bit on our first attempts at moose management. This week we will look at what other jurisdictions do for moose and what we may be able to learn from them.

Historical evidence shows that moose were not present in most of BC until the early 20th century.  History also showed that when moose arrived the wolf population exploded, and caribou began their precipitous declines during this same timeframe.  The abundance of moose soon replaced caribou as the premier source of wild game meat for many residents.

In parts of BC moose populations peaked in the 1940’s and then began a quick decline, much of which was attributed to the sudden increase in wolves.  It should be noted that this decline occurred long before the word “industrial” was ever attached to the word “forestry”.

Depending upon where in BC one looks or references, moose populations have cycled up and down several times since the 40’s.  Although predators are blamed for most of this, it is not ‘ predation alone.

Heavy snow years in combination with long cold winters and/or severe tick infestations combined with cold springs have all taken their toll on moose.  More recently industrial logging has been added to the list as being responsible for moose declines, with much of this blame being attributed to our response to timber salvage from the mountain pine beetle epidemic.

This brings us to 2021.  Everyone is still complaining about the lack of moose, too many predators and minimal government response in bringing moose back to the stature they once held in our Beautiful BC.

Is it just us?  Are we unique?  How do other jurisdictions manage their moose?  Is the decline of moose somehow related to human population growth, industrial development, and/or climate change?

Note: the following statistics are a combination of averages, rounded numbers and recognize that some vary from year to year, and those used here are for illustrative purposes.

Fact or Fiction – BC has more moose than Newfoundland, Sweden and Finland combined.

Fact or Fiction – BC harvests more moose than either of Newfoundland, Sweden, or Finland?

Other numbers of note:

So why the difference?  How can these three other places harvest more moose than BC despite being less than ½ the size, and in Newfoundland’s case, less than 1/8th the size?

BC has several distinct differences when compared to the other three jurisdictions that can partially explain these differences.

BC has more predators than the other three combined.  BC has wolves, grizzly bears, black bears and cougars who all can prey on moose.  The others have either few or none of these predators and do not factor predation as a significant mortality for moose.

Of note: not only does BC have more predators (both in numbers and species) but we place a higher value on our predators and as a result, we actively manage to conserve predators at the expense of their prey, with one being our moose.  The other three jurisdictions all place much higher values on their moose and manage to that.

Fact or Fiction – BC’s moose populations are threatened by hunting?

Fiction – almost all of BC’s regulated harvest is of bulls that are in excess of what is needed to propagate the species.   Harvest levels of cows by those not requiring licenses are not reported, but anecdotal evidence say this does create a negative pressure on populations.

Of note:  the lack of land claims or treaties in BC complicates the ability of government to have an overarching and comprehensive management strategy for moose populations and harvest.  The BC government leaves moose management in the control of the 100+ individual First Nations in BC that have moose within their traditional territory. The other three jurisdictions do not have this same issue.

It should be noted that the “Together for Wildfire” initiative by the BC government is an attempt to bring a more cohesive and comprehensive management plan for all wildlife in BC.

BC places little to no economic value on moose as part of our economy and source of food.  The other three jurisdictions all place high values on both the economy of hunting and the value of the meat as a source of protein for their residents.

Of note: although the BC government recognizes the importance of moose as a source of protein for indigenous peoples, they do not place this same value for non-indigenous peoples.  In general, moose are managed as a recreational opportunity and not as part of BC’s diet.  All three other jurisdictions manage and recognize moose as an essential part of people’s diet.

If the average moose is worth $2500 in meat value (a conservative value when compared to other organic sources of meat), then:

One common denominator of all four jurisdictions is that each has a forest industry that tends to dominate the rural land base.  One difference of note is that these other jurisdictions require the forest industry to manage their harvests and reforestation objective to favour the production of moose, up to the level where moose numbers begin to compromise forest objectives (by eating the plantations).

A common denominator that the other three have and BC does not is that moose are managed up to the level where public safety is compromised.  All three institute plans to limit the number of moose involved in vehicle accidents on their highways.  If accident levels go up due to moose collisions, then harvest levels go up correspondingly to reduce the moose and resultant accident levels.

Most of BC does not have enough moose for this to be a significant issue.

Next week a look at what BC could do to increase moose populations and harvest levels.