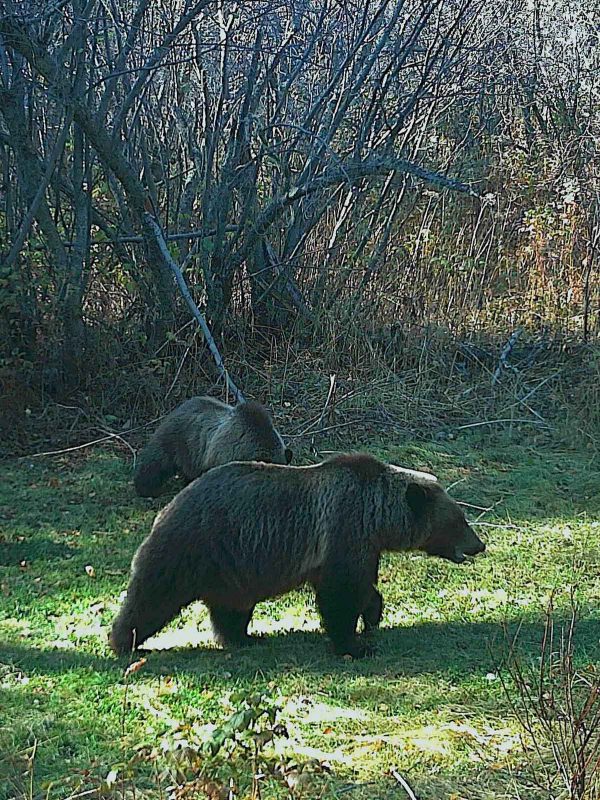 As surely as the distance howl of the wolf will stir one’s soul, the pop of a grizzly bear’s teeth will stop one’s heart.

Only the innocent or a fool would say a face-to-face encounter with a grizzly does not remove a year or two from one’s life.

For those who have never had the “grizzly” experience, a city version kind of goes like this;

Late at night, poor light, standing all alone at the ATM, waiting for your cash, as someone, much bigger, stands in the shadows, intently watching you. What do you do? Stay put? Put on a brave face, open the door and…? Call a friend? Dial 911? Or are you the eternal optimist, do not think about such things, just open the door, and walk out into the dark?

That large figure standing in the shadows is the grizzly bear. Meet one on the trail and which do you face? Curious, temperamental, territorial, hungry, defensive, or contemplating which way to escape.

Don’t know a single person who grew up with Ursus arctos horribilis that does not have a healthy respect, mixed with a dash of fear.

Like the wolf, the grizzly bear stirs many of the same emotions. Ask someone who has felt its teeth, heard its roar, watched it at play with cubs, dig out a marmot, catch a fish, or just stand there posing, while you get your once in a lifetime photo. Your experiences are your perspectives.

Like my experience with looking a wolf in the eye, so too for the grizzly.

Late fall, early 1970’s, mule deer hunting with my brother in the Tsini-Tsini flats along the Talchako River in the upper Bella Coola valley. Large cottonwood and cedar dominated flats, lots of little criks, swampy ponds and river back channels. Quiet walking as leaves have dropped, still wet from recent rains. Bush is thick, hope to find a deer in the back-channel openings where one can see a bit further.

After a night feeding in the adjacent and recently logged blocks, deer come in here to hide and catch a nap.

Hear a stick break, stop, jack a shell into the 30-30, sneak forward and peer around a large cedar, expecting a deer, now face to face with a very large grizzly, sitting on its haunches while digging skunk cabbage roots, some thirty feet away, intently watching us. Stop, back up, now 33 feet away and cannot see the bear. Step forward, better to see what he is up to than not. Catch our breath, slow down the heart rate, what to do? OK, make some noise, put a shot over his head into the tree behind him and just like that, he is gone.

Catch our breath, change direction, and back to hunting. Another stick breaks, step forward to see the north end of a sow and two cubs heading south out of their skunk cabbage patch. Ok, enough is enough, time to go home while we still can. Jump two more on the way out.

Although the grizzly season was open in those days and we could have been hunting bears, very few did, including my brother or me.

For the record, after eating fresh and not so fresh salmon for the past two- or three-months grizzlies will go into the swamps to dig and eat skunk cabbage roots to kill the intestinal worms they have inherited. Need to clean out the system and get rid of the parasites prior to denning up.

For the 70’s this was a rather normal story if one wished to venture onto the river flats adjacent to the salmon spawning areas. For part of the year, this is where grizzlies call home.

Fact – fish eating bears flesh have a taste of fish and may contain worms.

I could have told you the story of a good friend, out picking mushrooms, startling a sow with cubs, how when lying on his back, looking up at nothing but teeth, his dog, with a running leap, hit the bear and in an instance, dog, bear and cubs disappeared over the bank, but that would just be another bear story.

My father also grew up there, but when he was young, he too ventured out along the banks of the river and creeks to fish with his stick and string. Never saw a bear he said, as in those days any bear that did show up in the community was shot. Smart bears learned to stay away.

It stayed much that way until well into the 60’s when things began to change.

Fast forward to today, times have changed and it is not so safe to crawl through the bush along those same streams during salmon season.

I grew up in the Bella Coola valley and dodging grizzly bears has been part of my life since I was old enough to walk. During my life I have watched grizzly bears be considered a pest (bears were routinely shot around homes and farms), to a liberal hunting season where anyone could buy a tag, to limited entry hunting in some areas with full protection in others, to the hunting ban of today.

I also watched the grizzly bear population in Bella Coola valley steadily increase. I listened to an ever-increasing number of media reports and stories from friends and outdoors persons about their close encounters with grizzlies.

Despite increasing bear numbers and more close encounters, the BC government ended the grizzly bear hunt for all but Indigenous peoples of B.C. in 2017.

“By bringing trophy hunting of grizzlies to an end, we’re delivering on our commitment to British Columbians,” said Doug Donaldson, then Minister of Forests, Lands, Natural Resource Operations and Rural Development (MFLNR&RD). “This action is supported by the vast majority of people across our province.” And he went on to say, “It’s mostly a social values issue. When it comes down to it, this species is seen as an iconic species for B.C., and people just weren’t willing to accept the hunting of grizzly bears anymore in this province.”

Myth – banning grizzly hunting by licensed hunters did not end the “death by gun” of grizzly bears.