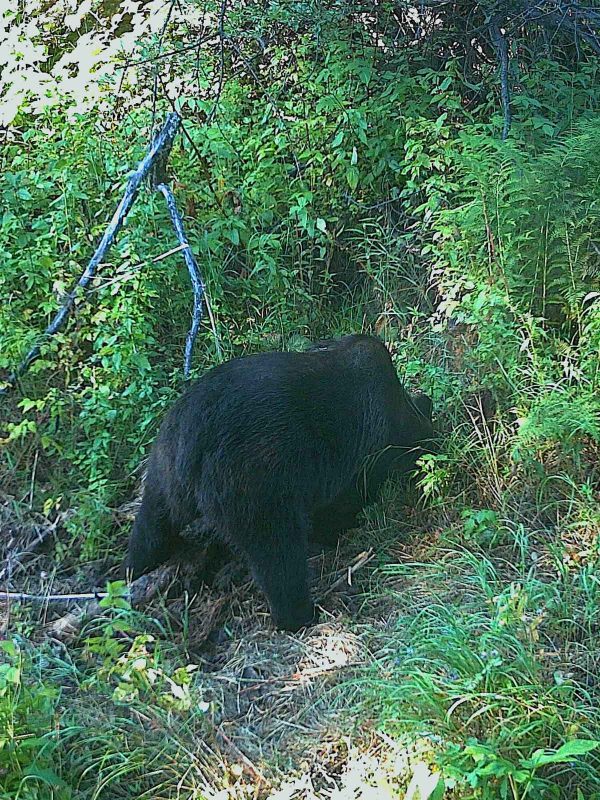 Grizzly bears are part of what makes BC a great place; one of our iconic species.

Living with them as their neighbor has given me a healthy dose of respect.  Although I am a hunter, I do not consider myself a bear hunter as it does not interest me.  I would much rather chase sheep, goats, deer, and elk and leave bear hunting to others.

Although other hunters share similar views, many do not.  Some live for bear hunting and good for them, as hunting is an essential part of BC’s wildlife management, both in helping manage populations and removing animals that pose a risk to humans.

My education by grizzly bears has given me one thought that sticks with me.

The longer we live with no hunting of grizzly bears, the more issues we will have with habituated bears, whether that be predatory or nuisance.

Normally when we think of habituated bears, we are taught to think of people leaving garbage out, barbeques uncleaned, fruits and gardens unpicked, something related to a bears’ food source within our community.  But that is not the only definition of habituation.

Fact – habituation also means bears become used to humans and no longer fear us as a competing predator.

Myth – bears understand when humans mean no harm and will leave us alone.

Like most predators, when grizzlies experience and learn that humans are also predators they begin to fear and respect the mere presence of people.  Hunted populations learn to avoid people, whether that means in our backyards or out in the bush.

Fact – research has shown predators learn to fear and understand the danger when humans actively pursue and stalk them.

Bears in Bella Coola are one of BC’s many examples.

In the 50’s bears were considered a “varmint” and one had to go searching to find them.  Bears were still there but lived nocturnally and tended to avoid people and communities.

In the 60’s bear hunting in Tweedsmuir Park was ended.  The Atnarko River (mostly within Tweedsmuir) used to be one of the favorite places for bear hunting.  For me, was for fishing.  I wandered up and down that river every summer chasing rainbow trout, but never at sunrise or sunset.   There were always tracks and during the salmon spawning season, partially eaten fish, but I seldom saw a bear.  And I never remember seeing a “trail closed for dangerous bear” signs posted by BC Parks.

Took more than 20 years, but grizzlies finally learned to come out of hiding and fish during the day.

In the 80’s bear viewing came into vogue along the Atnarko and if my memory serves me correct, grizzly hunting entered the Limited Entry Hunt (LEH) for areas surrounding the park. For the un-initiated, LEH means a limited number of tags are offered on a random draw for resident hunters to better control numbers of animals harvested.  “Dangerous bear, trail closed” signs also become the norm.  No more wandering the river looking for trout unless you packed a gun/bear spray.

In 1978, the Snootli Creek Hatchery’s was completed near Hagensborg, with the goal to increase local populations of salmon, mostly chum.  Fish weirs were installed on local tributaries to trap the salmon as part of the egg capture process.  As the eggs were removed the fish carcasses were put back into the water to ensure the flesh was returned to the ecosystem.

Weirs also create a convenient spot for bears to catch live salmon contained in a pen.

Reductions in grizzly harvests combined with an increase of easily available protein and more humans “watching” them have led to what we experience today.

Fact – a substantial grizzly bear population that for the most part, does not fear humans and has readily adapted to living within communities.

Fact – a grizzly’s view of what is acceptable community living is not necessarily what humans agree with.

Multi years of this combination has also had its tragic consequences.  More than twenty grizzlies have been shot by Conservation Officers (CO) and upset residents during the past two years in the Bella Coola valley, either as predators or nuisances.

Problem bear stories emanating from our mountain national parks are much the same. Grizzlies no longer fear hikers or photographers, and some bears have learned that when they approach humans, a rucksack will quickly be dropped and voila, instance lunch.

Myth – a grizzly bear that has no fear can live within a human community.

Myth – humans can learn to co-exist with habituated grizzly bears living within their communities.

Before I go much further, this is not just about grizzlies being mean, that all attack on sight, or that they should all be shot, or that hunting will end all human grizzly conflicts.  Yes, they can be mean and yes, may attack with no provocation, but no, they should not all be shot and yes, despite hunting, conflicts will continue, albeit at reduced rates.

Hunting of grizzly bears in the modern era, and especially within the Limited Entry Hunting (LEH) system poses no threat to the grizzlies’ overall population.

Myth –grizzly bears are in danger in BC.

Fact – grizzly bears maintain stable populations across the vast majority of BC.

Depending upon who one believes, there are somewhere between 10,000 and 15,000 grizzlies living in BC.  Those opposing the hunting of grizzlies like to say “remaining” in BC, or that there are parts of BC with few or no bears and therefore all need protection.

The reality is that BC has plenty of bears, maybe too many in some areas, maybe not enough in others.  BC also has no goal, objective, or idea on how many bears we should have.  10,000, or 100,000, they just do not know.   Ask any of our current politicians on what they think BC’s grizzly bear population should be and you will likely receive a blank stare.

They will either have never thought about it and have no answer or idea on what you are talking about or understand why we should have population objectives.

Some also claim that BC has 56 grizzly populations and that 9 are classified as threatened.  This author views this statement as “hogwash”, and akin to saying each city in BC has its own distinct population.

For whatever the reason, some bears travel and during breeding season, find mates far away from what we thought as their home ranges, intermingling with those that may not travel.  A few years ago, grizzlies that were tagged near their dens in the South Peace Rockies traveled as far west as Prince George and Smithers.  Others never left the area.  Some came back to den, some did not.

If history is any lesson, given the chance and time, grizzlies will eventually show up in those parts of BC that currently do not have populations.  Using Vancouver Island as an example – grizzlies showed up not because of climate change or lack of salmon.  They showed up because they wandered and when they found a home and food on the island, they stayed.

Myth – that grizzly bears need to be returned to all their former ranges in BC.

Fact – BC does not need or want grizzly bears in the Okanagan orchards, lower Fraser Valley farmlands, or our city streets.

So why the hunting ban?  Given that BC has more than enough grizzlies, that they still are free to roam across most of their historic ranges (excepting a few places where we do not want or need them), and that hunting is an acceptable wildlife management tool?

Next week the irony of it all.