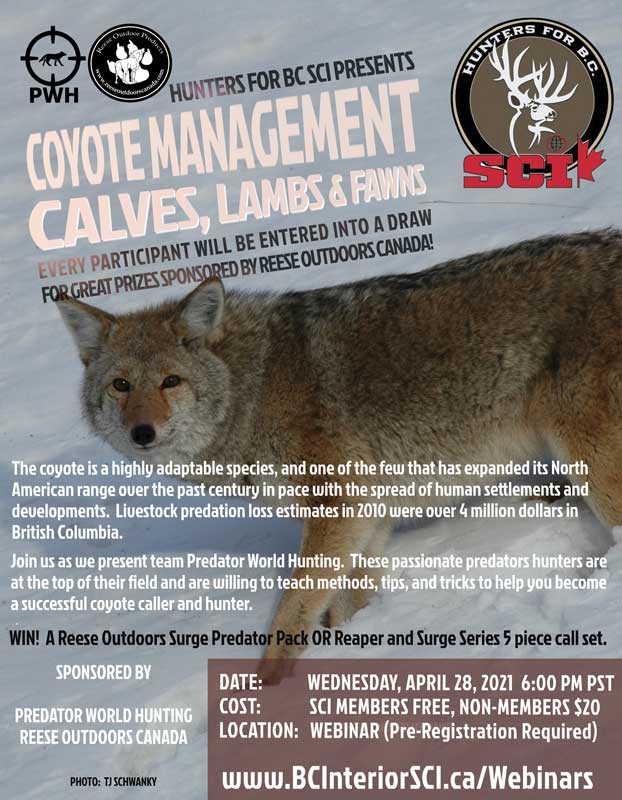 This webinar video available for purchase only. 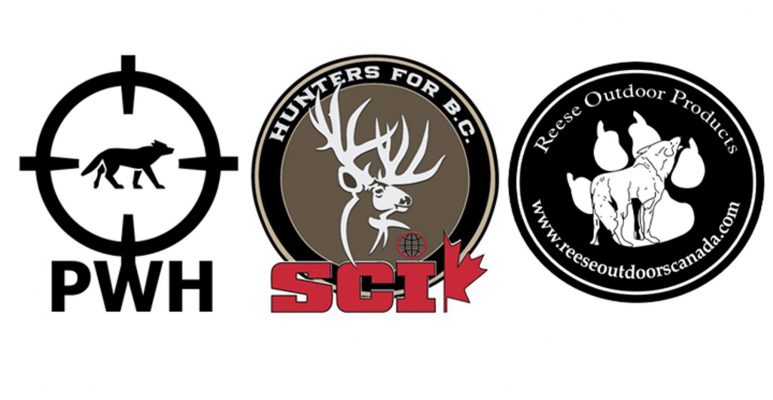 Coyotes kill an estimated one to threeCoyotes kill an estimated one to threepercent of all domestic sheep ewes and four to nine percent of all lambs in the United States each year.This wily predator has also caused havoc on poultry farms in some areas and occasionally at beef anddairy ranches during calving time. Further, profiteering from growing urban sentiments about “living inharmony with nature,” coyotes have become an increasing threat to domestic pets in many urban areas.(1)

Both research projects have a significant amount of trail cams as part of the ongoing studies.  These trail cameras require maintenance & repairs, batteries, SD Cards & bear guards!  We are asking you to give generously to support research & science of our wildlife right here in B.C.

Hunters for BC SCI invites you to join us for this informative webinar! We present Dean Trumbley, Host of Federal Trigger Effect as we explore how Social Policy has affected Wildlife Management.
The presentation main theme is around the rise of social policy effecting wildlife management via the anti-hunting movement. Dean delves into the history and reasons on these four major questions:

“On prey and predator abundance: lessons from history”

I have been asked to address the precipitous decline of wildlife in this province, a decline that I am currently experiencing on Vancouver Island. When I speak of past wildlife abundance I am met with disbelief, but I shall give a few examples.

Today, throughout North America and Siberia, there are regions that are virtual free of big game animals, despite abundant habitat. Moreover, areas of high wildlife abundance do not appear to be ecologically different from areas of great big game scarcity. Some such areas changed from areas of high ungulate abundance to great scarcity in the authors lifetimes. The explanation appears to be that areas free of human wildlife management become “predator pits”, in which wolves deplete big game populations, while brown bears maintain subsequently very low prey population numbers via the killing of neonates. Exceptions are areas which, by virtue of rugged geological formations, allow ungulates to escape, reducing predation efficiency. Here remnant populations of ungulates persist.

However, not only wolves, but mountain lions can also cause predator pits. Moreover, the Alaska Department of Fish and Game developed a concept similar to predator pit under the title “Low Density Dynamic Equilibrium or LDDE”. Flourishing big game populations are the consequence of the following factors: where trap lines were patrolled by dog sled, and areas where pack- and riding horses were overwintered, wolf populations were severely reduced, allowing a rebound of ungulate species. Studies in Yellowstone National Park show that one wolf requires 16-22 elk per year. Conversely, the death of one wolf allows 16-22 elk to live. Historically, predator control officers removed wolves from settled landscapes, while fear of hydatid disease and rabies resulted in broadcasts from plane of poisoned bait. Abundant wildlife populations were thus a function of predator control.

Predator pits are unnatural as they are the result of differential survival of large predators following human-caused Pleistocene extinctions. Tigers, leopards and lions can effectively control wolves, and together with other large predator species such as saber-toothed cats,  jaguars, predacious bears, cave-hyenas and dire-wolves kept grey wolves at low levels. On the other hand migratory ungulates such as reindeer/caribou and bison have been able to escape the predator pit phenomenon.

We conclude that Post-Pleistocene wildlife and biodiversity in North America and Siberia will thrive only through intense, knowledgeable, hands-on management, primarily of carnivores. Protectionism, on the other hand results in the virtual absence of ungulates in areas of unimaginable size as witnessed today in Siberia, and parts of North America, wherever wolves, grizzly bears and mountain lions are protected and freed from any management.